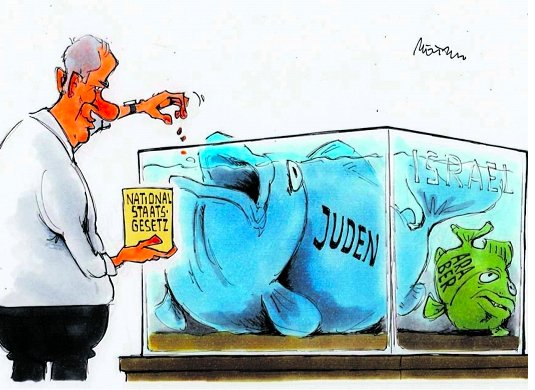 The bishop of the Protestant Church of Berlin-Brandenburg (EKBO) was forced to take a stand on a scandal in the newspaper „Die Kirche“, which he co-edited.

In its current issue, the newspaper printed a caricature about the nation-state law in Israel showing a Benjamin Netanyahu feeding a fat fish with the inscription „Jews“, while a small fish with the inscription „Arabs“ gets nothing. The aquarium containing both fish bears the inscription „Israel“. The fat fish with the inscription „Jews“ stands in the tradition of anti-Semitism. To find such a caricature in a Protestant newspaper is not a petitess, but a real scandal.[…] If you were dealing with a mere faux pas, it was not worth writing about it. However, the cartoon is symptomatic. In the same newspaper there is agitation at the lowest level against parish priests who are not functionaries, but who sacrifice themselves every day in the service of their community, only because they do not share the ruling political red-green attitude. In this respect, the caricature and the article about the allegedly right-wing priests are only two sides of the same coin.[…] Less and less does the Church leadership of the EKBO convey the certainty that it is the Church rather than a subdivision of the Green Party. For example, for a lot of money, church tax money, a work area of „democratic culture“ was installed in the Protestant Academy in Berlin, which is dedicated to the fight against everything that he considers right-wing populist.[…]On the other hand, Bishop Markus Dröge seems to have no problem with the fact that the integration commissioner for the church district of Jüterbog, Mechthild Falk, is under criticism, according to the paper Märkische Allgemeine Zeitung, of hiding „violations of the law“ by refugees because she fears „that there are increasing fears that criminals have come to our city in droves“. Because: „A relationship of trust is needed for sensitive conversations“, even if a sexually assaulted behaviour is recognized. She herself had learned that a refugee had been driving without a driver’s license and insurance – and had not reported the offence. The fact that an integration commissioner of his diocese puts himself above law and order, does not report violations of the law if it only serves the supposedly good cause is actually a scandal, but apparently behavior advocated by the church leadership.