Nuri Sahin is  currently not successful on the pitch. He draws attention to himself with a questionable Twitter message in which he praises the Turkish soldiers who are waging a war of aggression in Syria.


In the last four Bundesliga games, BVB player Nuri Sahin, born in Lüdenscheid, was not on the pitch. Sahin spends his time in social media. However, he does surprise us with a political message on Friday. He writes in Turkish: 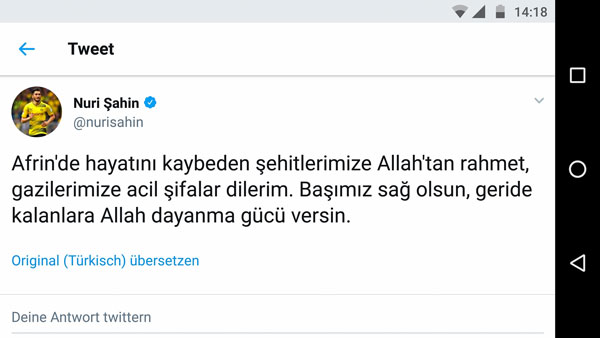 Translated, this means:“May God bless the fallen martyrs. I offer my condolences to your relatives. I wish those who are still there a lot of strength. God is with you.“
Relatively blatantly, a German Bundesliga player speaks out for the Turkish war in Syria and wishes the soldiers all the best. However, what the Turkish army is currently doing in Afrin is no ordinary war. She slaughters Kurdish civilians.
Borussia Dortmund should consider whether a warmonger such as Nuri Sahin could have a place in the squad for much longer. The slogan „Borussia unites generations, men and women, all nations“ doesn’t suit Sahin..
https://www.ruhrbarone.de/bvb-spieler-nuri-sahin-trommelt-fuer-krieg/152035

This site uses Akismet to reduce spam. Learn how your comment data is processed.